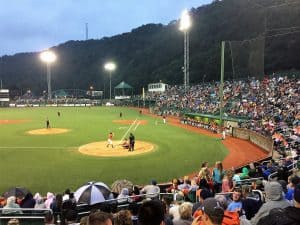 The official opener of the 73rd annual AAABA Tournament attracted a crowd estimated at 5,500 despite rains that washed out the first seven games of the day and created an inconvenience throughout Monday night’s game.

The big Point Stadium crowd saw a well-played game that initially ended in unusual fashion and after a ruling on a protest will be competed at 9 a.m. on Tuesday.

Baltimore’s Maryland Monsters initially won the well-pitched game 2-1 thanks to a run-scoring single in the bottom of the eighth. But the contest was played under protest at that point as host team Johnstown Martella’s filed the protest due to the use of what eventually was determined to be an illegal bat.

The game will resume with the score tied 1-1 and Martella’s Pharmacy batting in the top of the ninth inning.

The tournament will play catch up on Tuesday with most teams playing two seven-inning games at 10 a.m. and 2 p.m.

In addition to completing the Monday night game, Martella’s Pharmacy will play Youngstown at 7 p.m. at Point Stadium. Singer/songwriter Josh Gallagher, a finalist in NBC’s “The Voice” will sing the National Anthem” prior to the game and “God Bless America” during the seventh inning stretch.