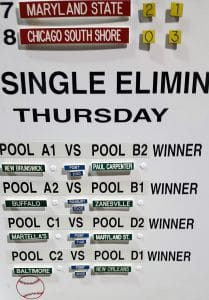 With the win, Martella’s finished 3-0 in Pool C.

The loss put Altoona among three Pool C teams with 1-2 records. Baltimore advanced out of the pool based on runs allowed (18). Johnston Realty had to either win or lose by fewer than seven runs on Wednesday to earn the second spot.

In Pool A, New Brunswick finished 3-0 and Buffalo earned the second spot with a 1-2 record based on tiebreaker for runs allowed (19).

In Pool B, defending champion Zanesville and returning national runner-up Johnstown-2 Paul Carpener Capital Advisors advanced as the one and two seeds, respectively. Each finished 2-1, with Zanesville taking the head-to-head tiebreaker.

In Pool D, New Orleans went 3-0 and Maryland State earned the second seed with a 2-1 mark.