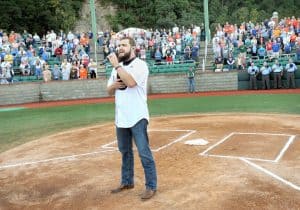 Singer/songwriter Josh Gallagher, a Cresson native and finalist on the hit NBC show “The Voice,” was a big hit at the AAABA Tournament.

Gallagher, a former player with Altoona Johnston Realty in the 2010 tournament, sang the National Anthem prior to the game and “God Bless America” during the seventh-inning stretch.

After the game, which Johnstown’s Martella’s Pharmacy won 4-3 over the Youngstown Creekside Crocodiles, Gallagher performed several of his songs to those who remained among a crowd estimated at 3,000.

During the game Gallagher interacted with fans, even spending a few innings sitting and chatting with the AAABA Ambassadors in the seats behind home plate.

Photograph courtesy of The Tribune-Democrat.